Team De Rooy like a train to the finish

Iveco drivers all rise in the classification.

BISHA – The complete quartet of drivers from Petronas Team De Rooy Iveco and Mammoet Rallysport rode today in battle order through the wasteland of Saudi Arabia. The men of Team De Rooy stopped the Iveco-train in seventh, eighth, ninth and tenth place this afternoon.

“It was the most boring day of this rally for us,” said Janus van Kasteren, who finished seventh. Behind three unbeatable Kamazzen, the rider from Veldhoven today also had to acknowledge the superiority of Ignacio Casale, who finished fourth (before Shibalov in the Kamaz) and can bear the title of ‘best of the rest’. Martin Macik was sixth just ahead of Van Kasteren, Marcel Snijders and Darek Rodewald. “It was mostly fast and straightforward. Whoever has the most horsepower wins. We are still lacking in that area. Especially the torque of the Kamaz is very good. When they hit the throttle, something happens immediately. Response takes a little longer with us. We were able to detect this well during this rally and it is an area of improvement.”

A positive point was that Janus’ team did move up a place in the standings. “We are past Loprais. It was a very good day for the team. We are now fifth, sixth and seventh in the classification. We stayed close to Martin and Vick for the whole day. Partly because of the dust we couldn’t get past them. But I am still satisfied and looking forward to tomorrow,” said Van Kasteren, who lost 5 minutes and 36 seconds to winner Sotnikov.

In addition to Janus and Martin, Vick Versteijnen also automatically moved up in the classification. “We gave it all today. It was a special with fast tracks with loose sand. It was full throttle all day,” says the rally driver from Hilvarenbeek, who took over Hans Stacey’s place in the Iveco Powerstar just before the start of the Dakar Rally. “We had no technical problems. We are happy with today’s eighth place. Tomorrow will be exciting. Then we get serious dunes again. I hope tonight we can find something to fix the tyre deflating system problem. We really need that tomorrow. So far I am very satisfied with our seventh place overall. Two more days to go and I’m going to do everything I can to hold on to that.”

It soon became clear to Martin van den Brink that a stage ‘without doing crazy things’ had to be ticked off. “We saw Loprais standing still at the very beginning of the stage and Huzink also stopped early.” Both the Czech Loprais and Gert Huzink, who broke his truck in two pieces on a dune, found their Waterloo today. Martin van den Brink and his teammates from De Rooy reaped the benefits. The experienced rally driver moved up to sixth in the overall standings. “This was the only way to win anything today. The bad luck of a competitor.”

Martin van den Brink, Peter Willemsen and Bernard der Kinderen were part of the Team De Rooy convoy today. “We rode like a train over the special. It was fast and technical and there was a lot of dust,”

De Harskamper eventually finished ninth. Martin had to let pass Janus van Kasteren and Vick Versteijnen. “After about 100 kilometers we searched for a waypoint. Vick then passed us and Janus followed him. We then drove the entire special like a train.”

Behind the leaders of Team De Rooy, Mitchel van den Brink once again made an excellent impression. The fast assistant of Petronas Team De Rooy Iveco hooked up on the Iveco Powerstar train and today ranked 10th. “I am especially happy for Mitchel today,” says Van den Brink senior. “A top ten ranking is great. I am really a proud father.”

After his special stage, Mitchel reacted modestly and realistically. Just like he’s been doing the entire rally. “We had a nice day. After 500 meters we saw Huzink with a written off truck. Then Loprais also had bad luck. We all move up a spot. Today we drove a lot behind the Tatras of Paskevicius. At one point we passed him, but we had to go back a bit to find a waypoint. Then I was back in the dust of the Lithuanian.”

Nevertheless, Mitchel van den Brink, navigator Richard Mouw and Bert van Donkelaar can be very satisfied with their ranking. “We overtook Pascal de Baar on the special. We drove through the mountains for a while on tracks with lots of stones. It looked like some kind of trial, but it was fast. Yes, I thought that was very cool. In the final phase we didn’t get past the Tatras, but we were a little faster in the end. I finished very close to my father today. Yes, that’s nice to see too,” said a very satisfied Van den Brink junior when he still had 150 km to go on his way to the bivouac in Bisha.

Tomorrow may still bring some changes. Leader Sotnikov, who also won the stage today and stayed ahead of his Kamaz teammates Nikolaev and Karginov, will not be too concerned. The ‘loop’ around Bisha does present the riders with some technical challenges. In addition, a series of dunes of all shapes and sizes await. According to the organization, on Thursday, in the 346 kilometer stage, dunes with the softest kind of sand that can be found in Saudi Arabia must be conquered.

Our daily selection of photographs is now arriving! 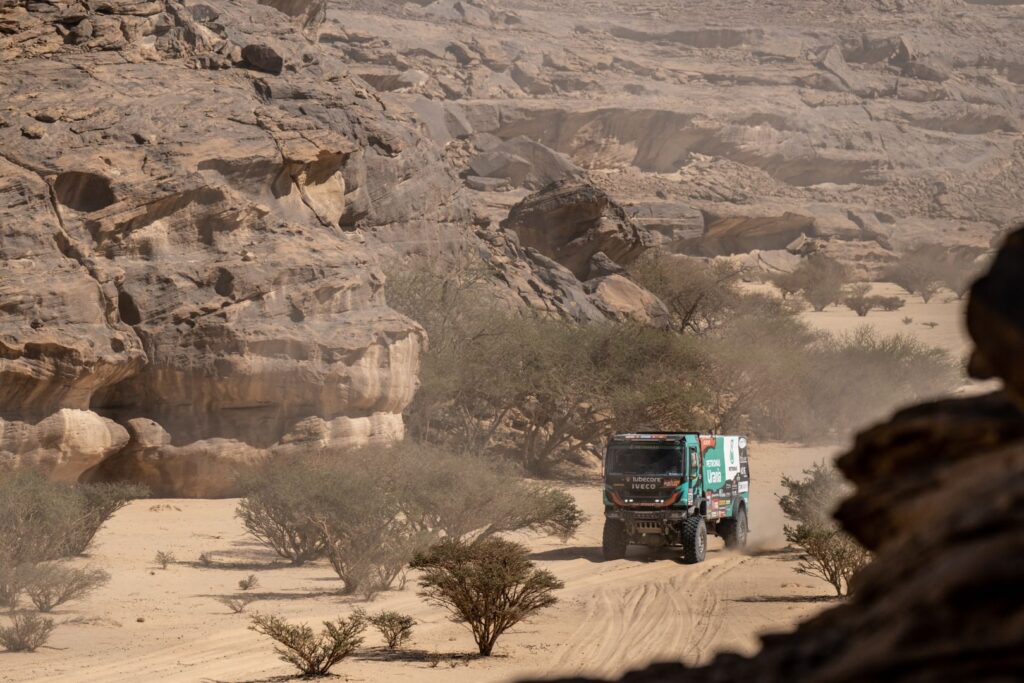 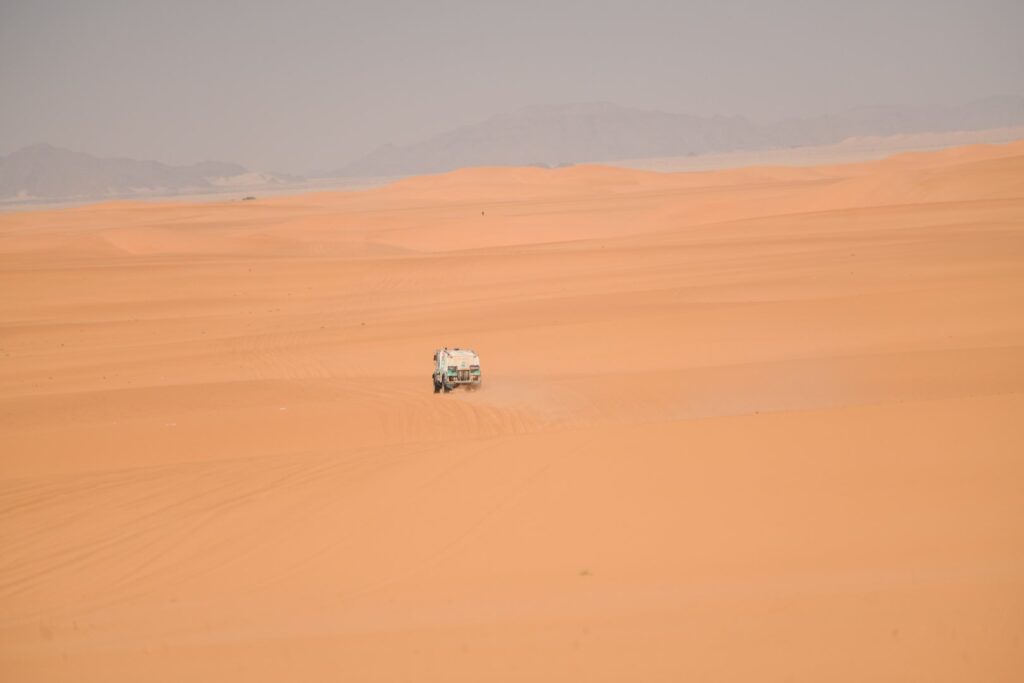 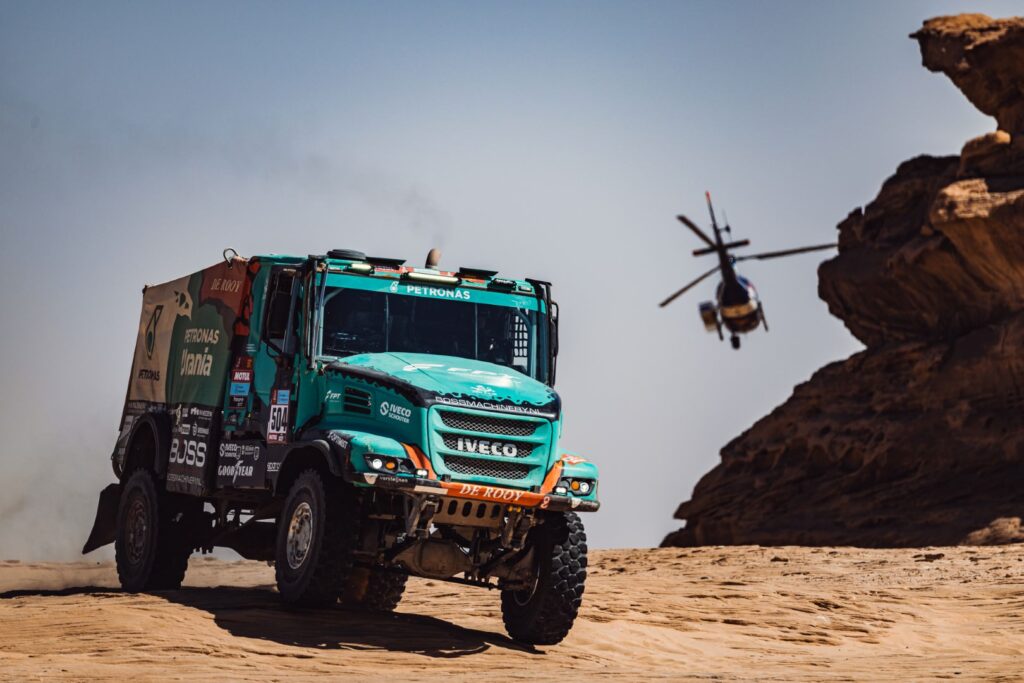 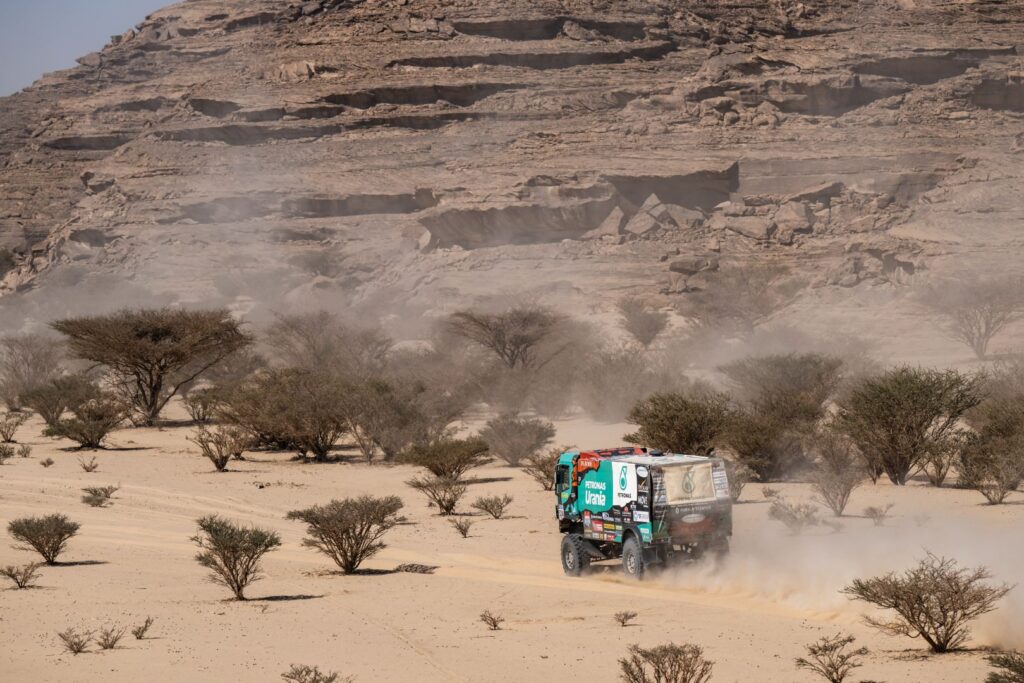 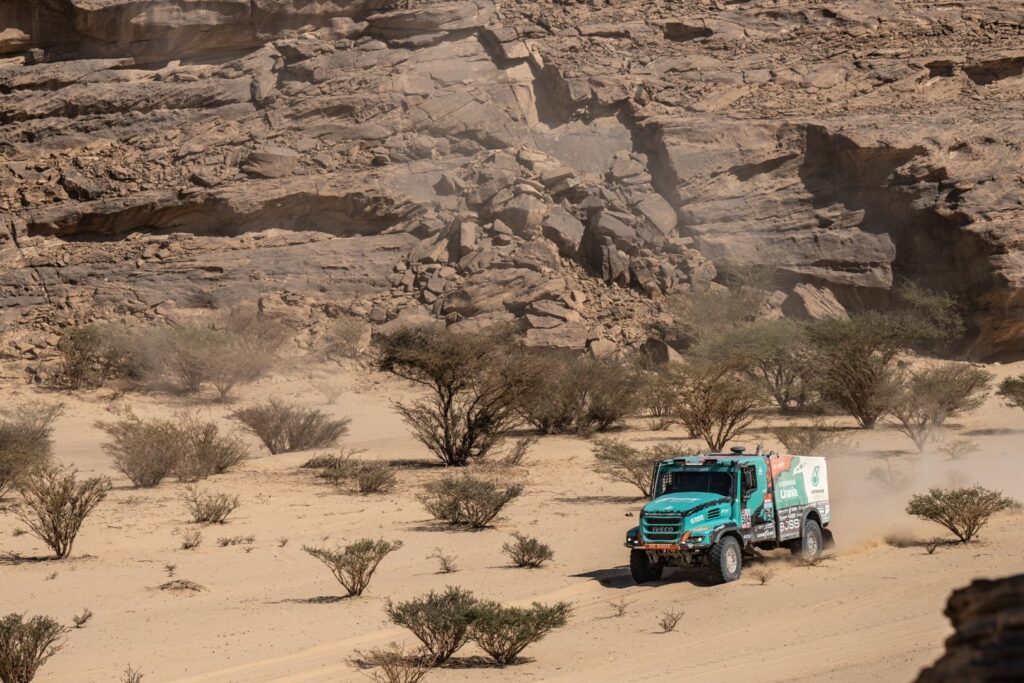 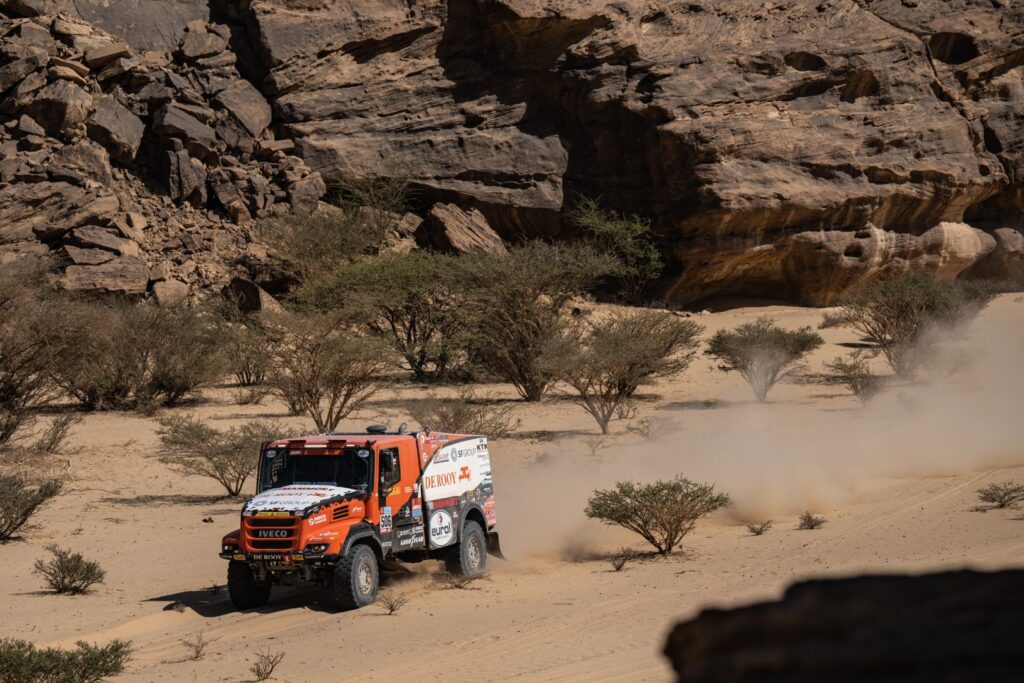 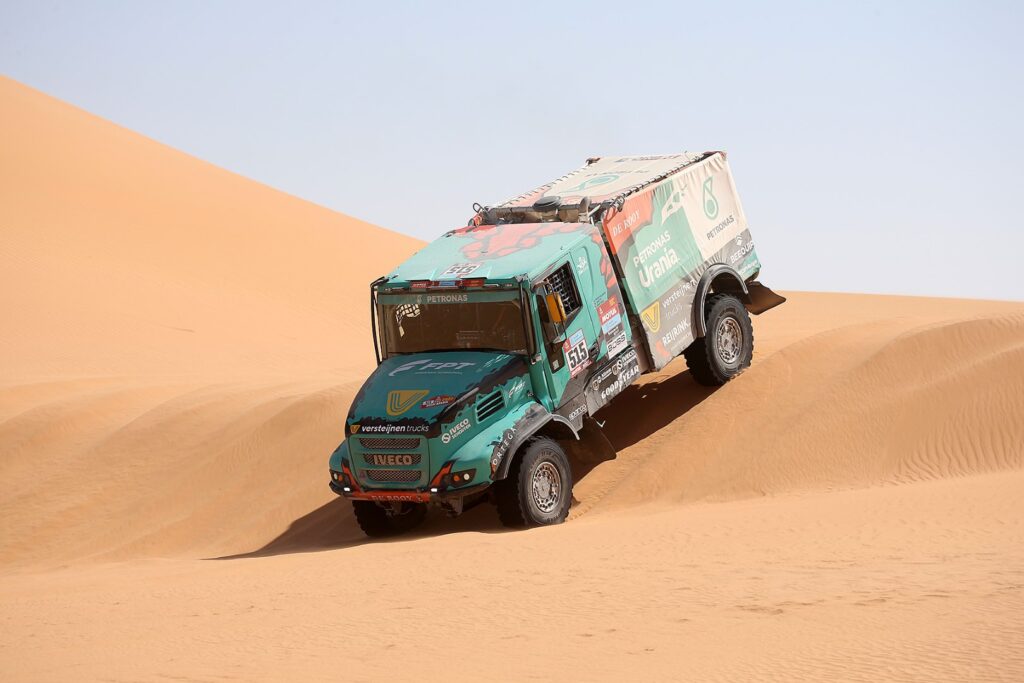 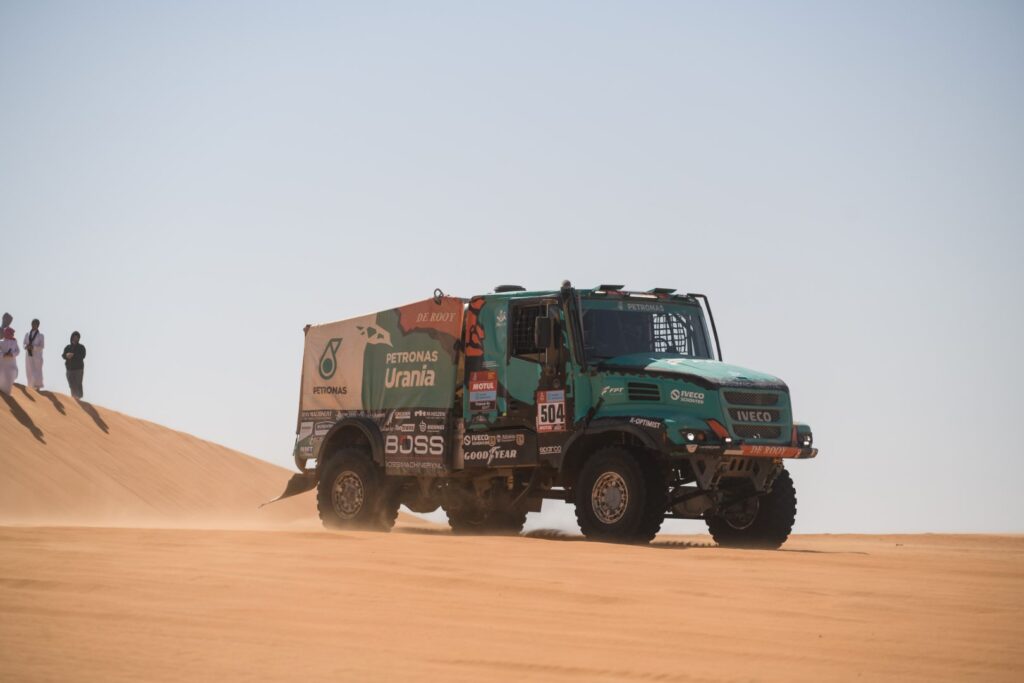 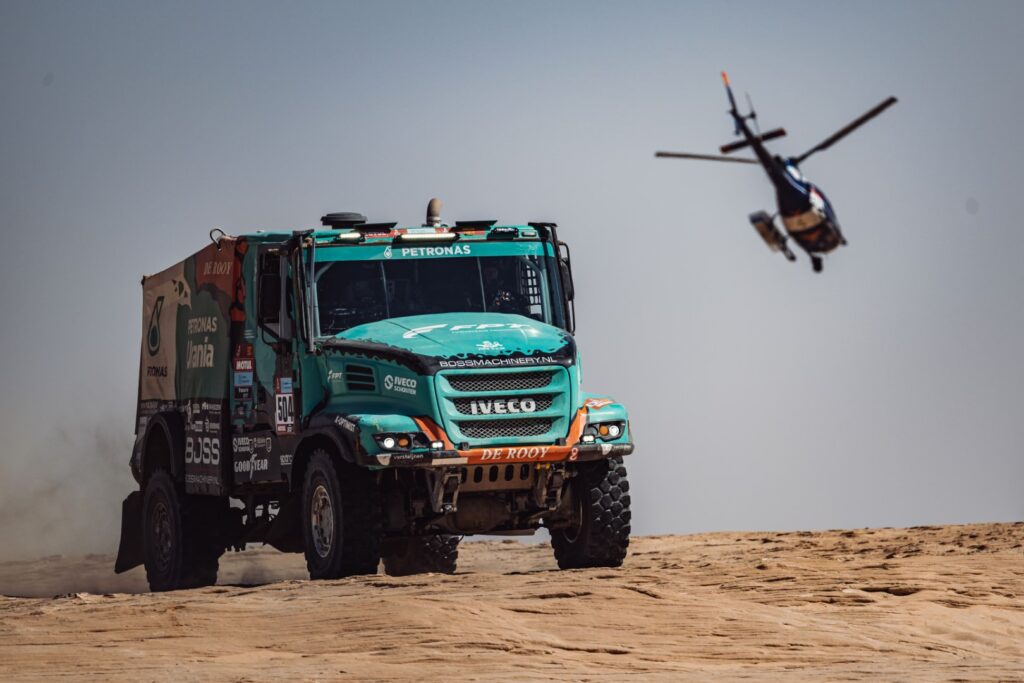 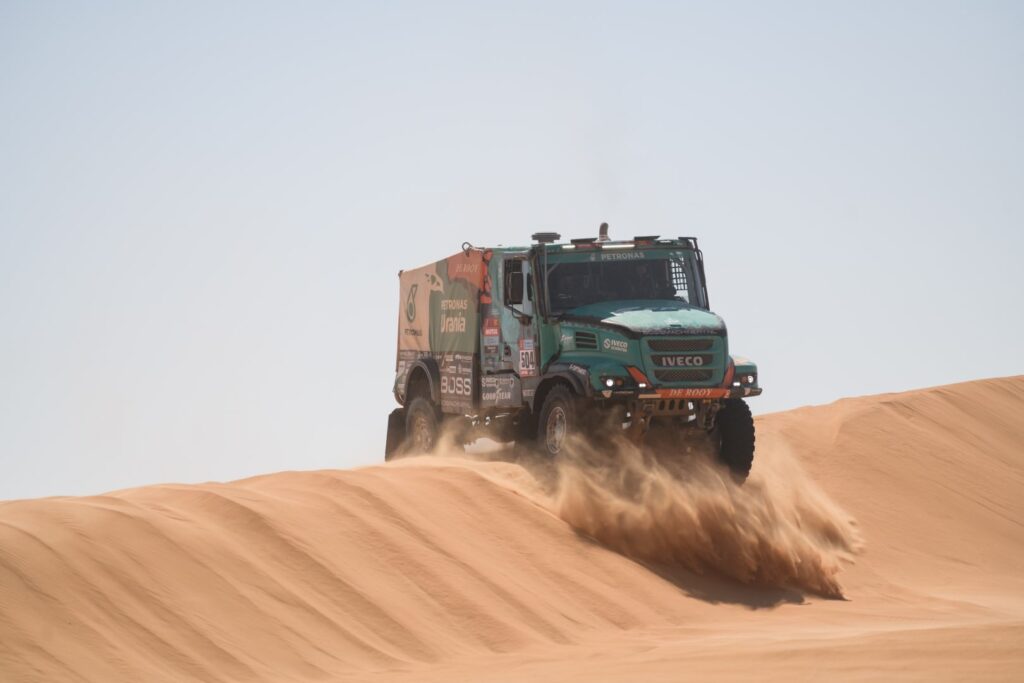 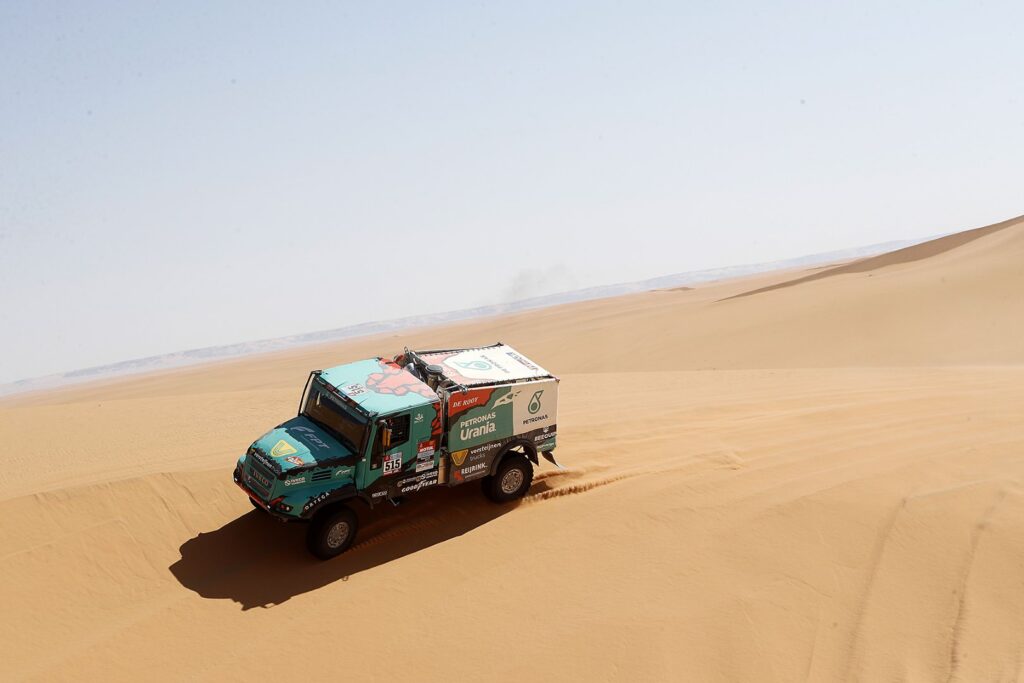 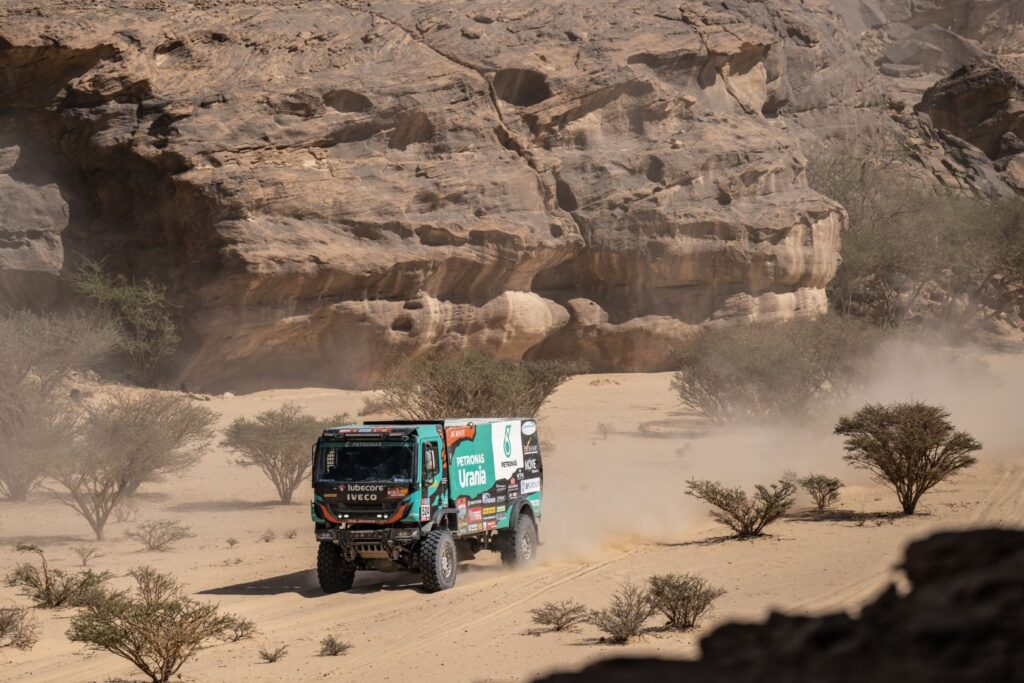 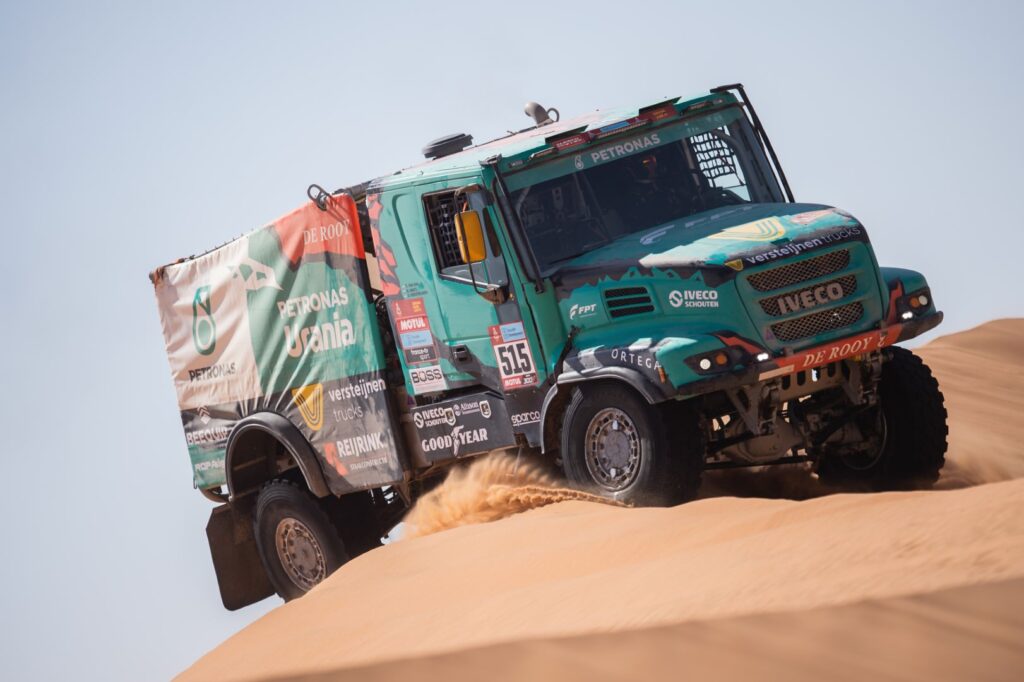 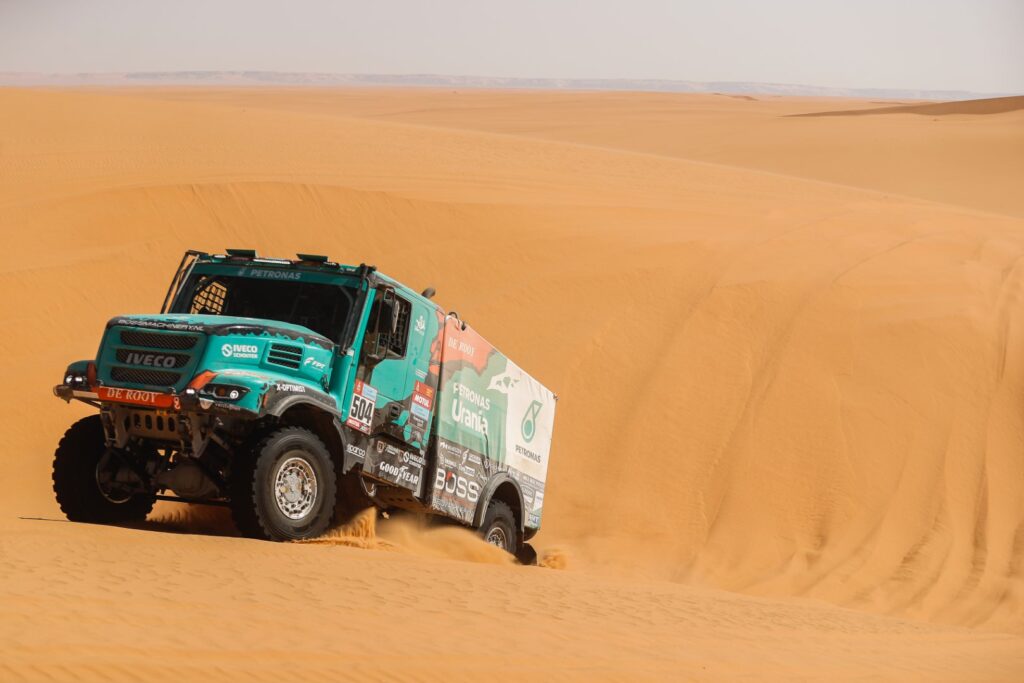 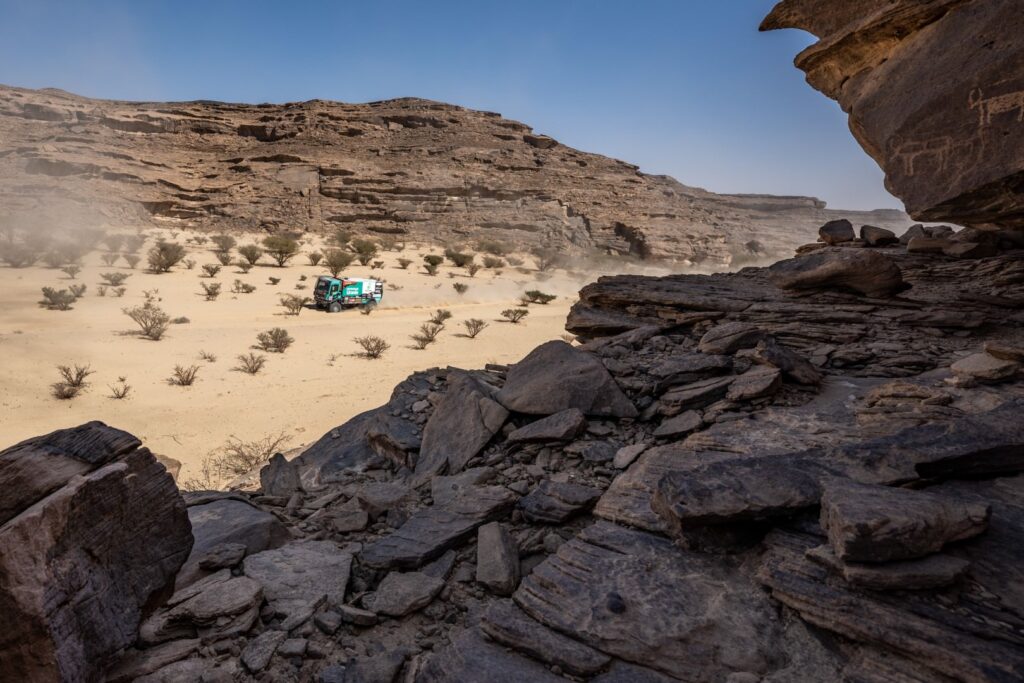 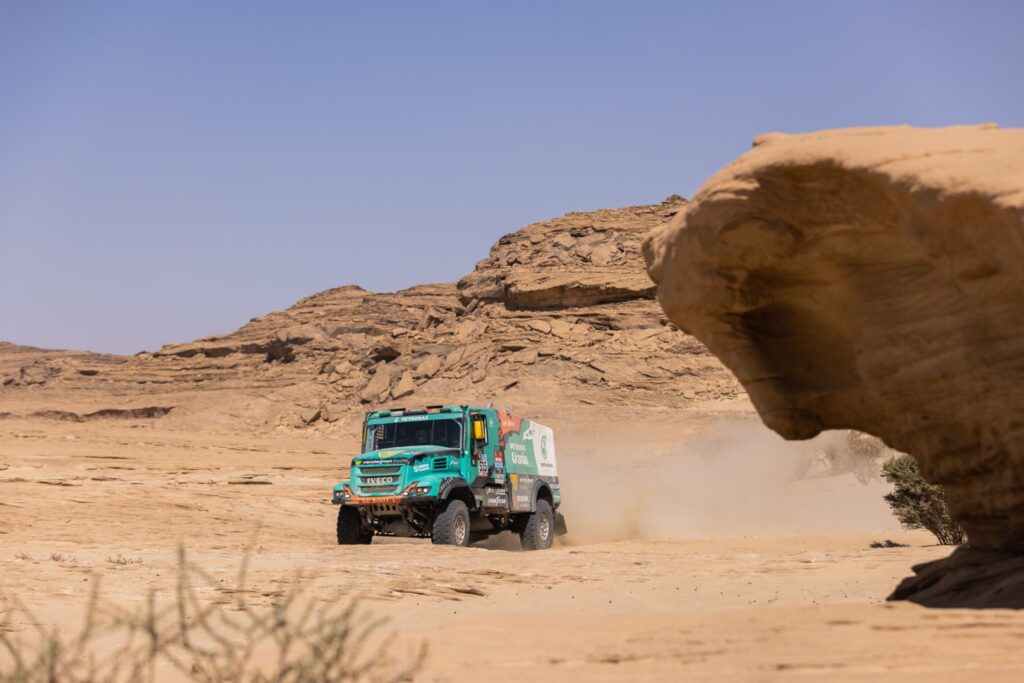 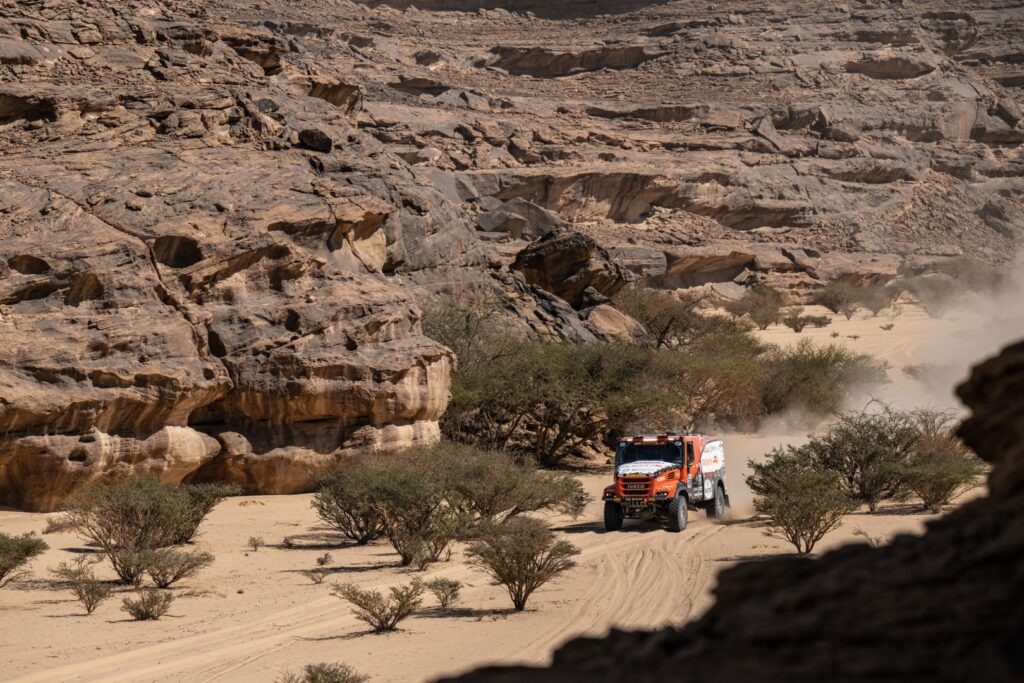